Some Jiu-Jitsu historians say that the origins of the "Gentle Art " can be traced back to India, where it was practiced by Buddhist monks. With the expansion of Buddhism, Jiu-Jitsu spread from South-east Asia to China, finally reaching Japan, where it developed and gained more popularity. 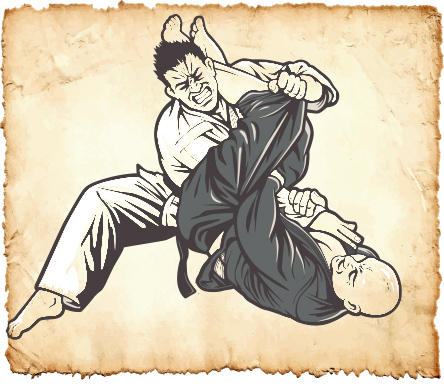 At the end of the century XIX, some Jiu-Jitsu Masters emigrated from Japan to other continents, teaching martial arts, as well as participating in fights and competitions. Esai Maeda Koma, also known as "Conde Koma ", was one of these masters and arrived in Brazil in 1915 where he taught Jiu-Jitsu the Gracie family.

The Gracie family made Jiu-Jitsu a lifestyle, with workouts, diets and became famous worldwide for developing Jiu-Jitsu and for all members of the family to adopt this lifestyle. The Jiu-Jitsu that originally is from Asia, was the first and only martial art in the world that had its origins modified and today the modern and developed Jiu-Jitsu coming from Brazil is known worldwide as  "Brazilian Jiu-Jitsu ".

In 1925 in Rio de Janeiro, Carlos Gracie (patriarch of the family) inaugurated the first  "Gracie Academy of Jiu-Jitsu " and began to share his knowledge with his brothers and children, adapting and refining techniques for the naturally more characteristics Weak of his family. Concerned with self-defense, they adapted the techniques based on principles of balance and lever, and a system of manipulating the body in a way where one could avoid relying on strength and use the strength of its opponent in its favor.

Having created an efficient self-defense system, Carlos Gracie saw in art a way to become a man who was more tolerant, respectful and self-confident. In order to prove the superiority of Jiu-Jitsu over other martial arts, the Gracie family has always challenged the greatest fighters of the time, fighting and defeating larger and heavier opponents, quickly gaining recognition and prestige over of the years.

In 1993 the "Brazilian Jiu-Jitsu " burst into the world, after they created the UFC (Ultimate Fighting Championship) in the USA, along with globalization and the Internet, were able to prove to be the most efficient fight in the world in a Real combat. With the creation of IBJJF(International Brazilian Jiu-Jitsu Federation) the sport has spread throughout in several countries, being the most growing martial art in the world.

What our students say ?

Great mix of people. Very welcoming. Superb instructors. Quality lineage. Everything you could look for in a club and team!

Amazing place . Lovely and very helpful people. My son is more confident and more open-minded then ever before. Great work :)

Great training in a fun friendly atmosphere with quality high level coaching. I Would recommend this club to people of all ages and belt levels, be part of a team not just a number

High level black belt instructors. You thought you knew BJJ before? You were wrong 😉 Your other class is our warm up.. Highly recommended

Excellent coaching from IBJJF qualified coaches from beginners classes right through to advanced level. Great mix of students from white to black belt,GI and noGi Academy D15 has it all. OSS

Fantastic academy for anybody wanting to learn jiu jitsu. All the coaches are super helpful and knowledgable and everybody on the mat are really friendly and supportive to new students. Can't recommend coming down and trying a few classes highly enough 👍